This blog aims to evidence my research and studio activities, to share this methodology, and open it to analysis and discussion.

As Artist in Residence I will be working alongside Level 4 Fine Art students and Level 4 Appied Art students responding to Transcriptions, a University of Wolverhampton studio-based project. The project calls for a personal response to a recently encountered art work. Interpretation or translation of something about the original art work into another form has parallels with my own current practice in which museum collections are a point of focus.

The project positively encourages students to look widely for inspiration and I have researched three very different sources, chosen specifically to show a wide range of media and makers:

An A3 mind map is being developed for each art work to chart my initial investigations. Sources of information are referenced on each map.

Free Radicals was made using a range of tools to scratch directly into the black film surface. Len Lye was interested in indiginous cultures and the music from the African Birgami Tribe inspired this animation. 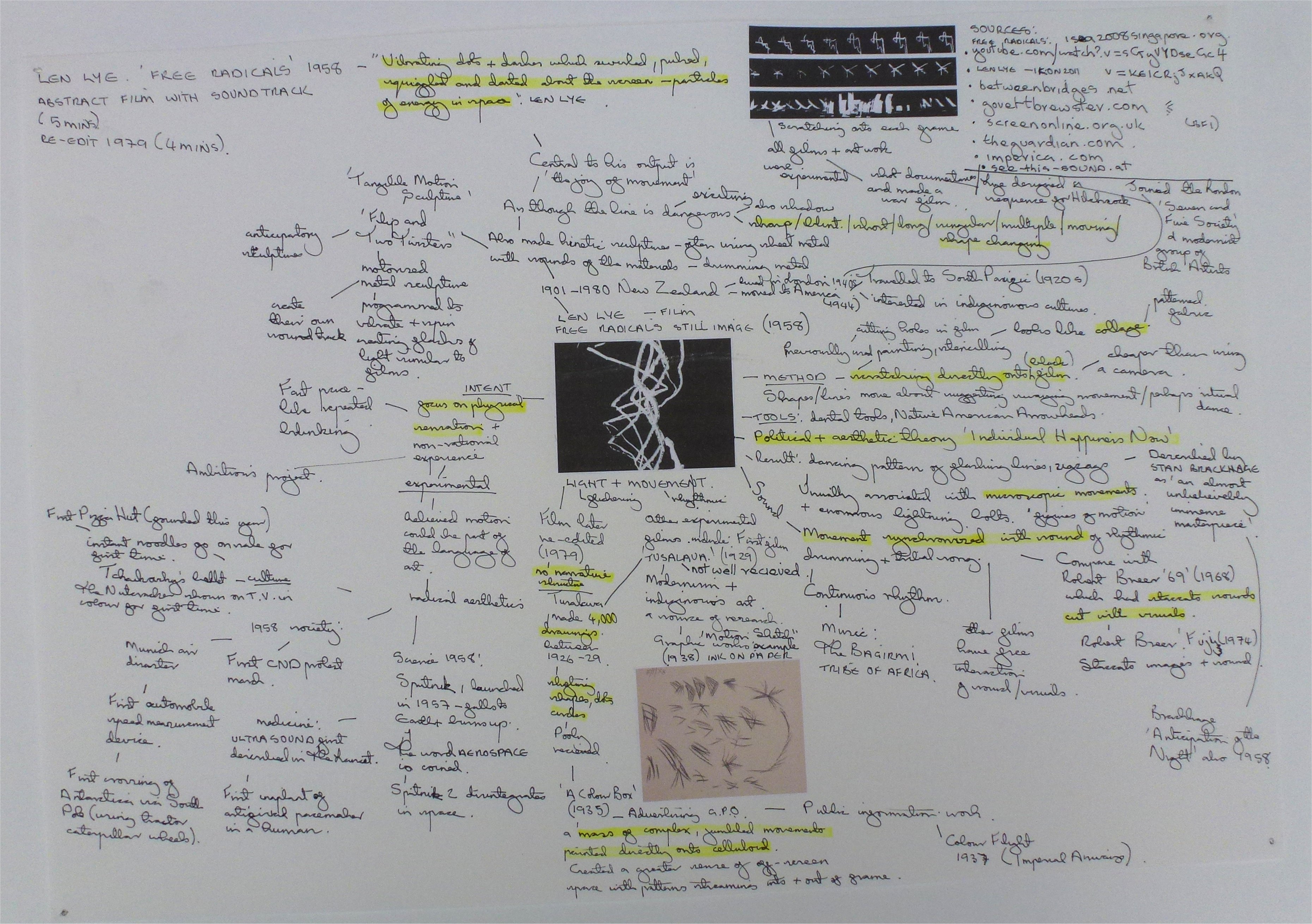 Recently discovered with ongoing exploratory conservation, items from this find are exhibited over a number of Midland museums and art galleries.

Together with the items found, I am also interested in the methods and processes of observation and conservation. These include itemizing, grouping, x-ray analysis, scanning electron microscopy, use of thorns to remove soil, academic discussion and documentation. 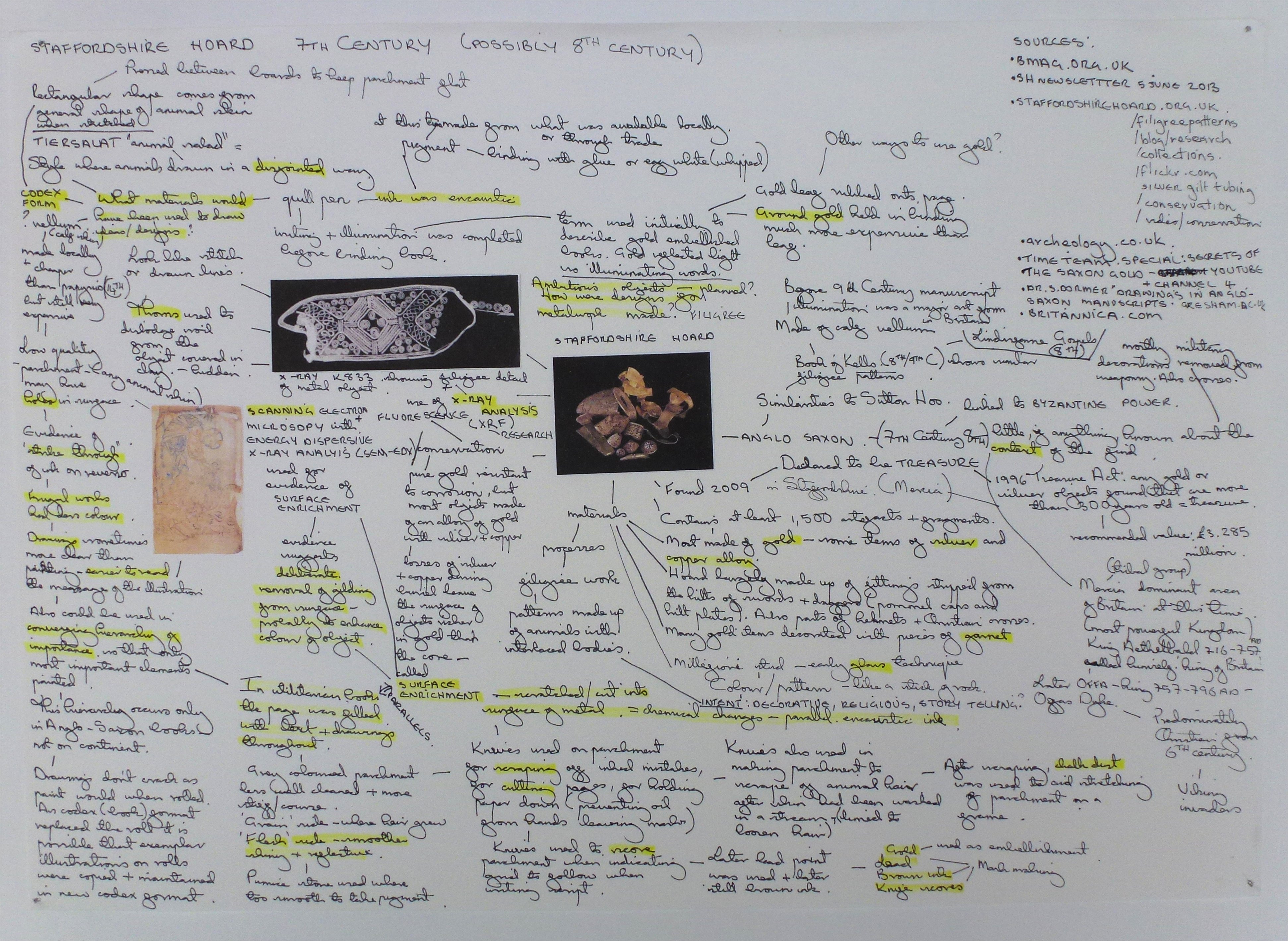 Portrait of George Humphrey by James Gillray has been exhibited in a number of galleries including Tate Britain. I arranged to view the art work without frame or glazing in the Print Room at The British Museum. I made a detailed in-situ sketch using graphite, including notes about the materials used by Gillray and observations about the condition of the paper supporting the original drawing. 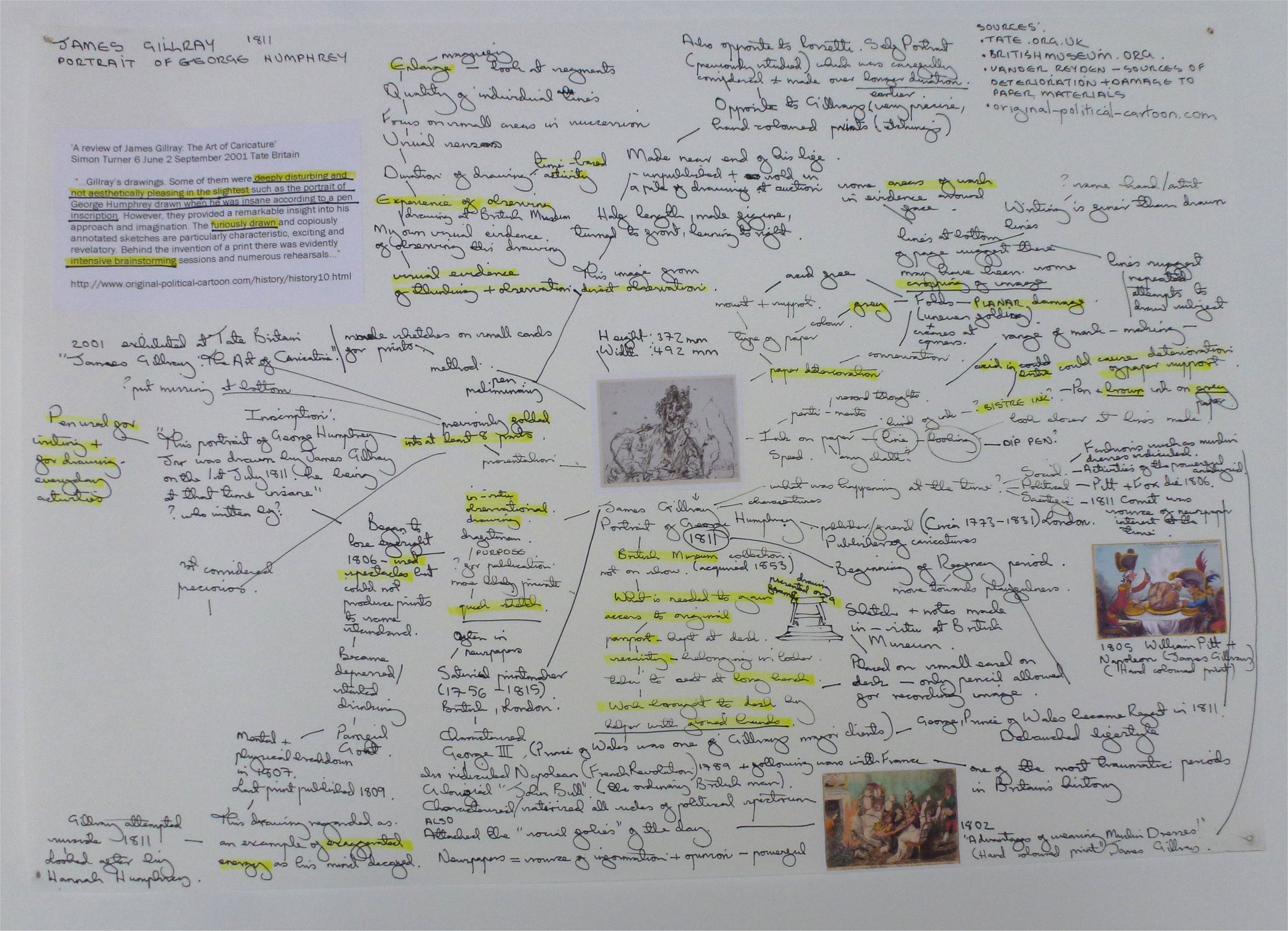 Close proximity to Portrait of George Humphrey by James Gillray, and the opportunity for in-situ drawing activity, encourages me to develop my project in response to this piece. This original Gillray sketch, was found in a bundle of papers, was drawn by political cartoonist James Gillray. Once described as being “…furiously drawn…” and “…not aesthetically pleasing in the slightest…”, (Simon Turner, 2001) Portrait of George Humphrey is unlike earlier tightly crafted cartoons by Gillray.

My aim is to develop the experience of directly observing the Portrait of George Humphrey by James Gillray at The British Museum, using my initial sketch as a source for explorating the process of drawing in-situ. 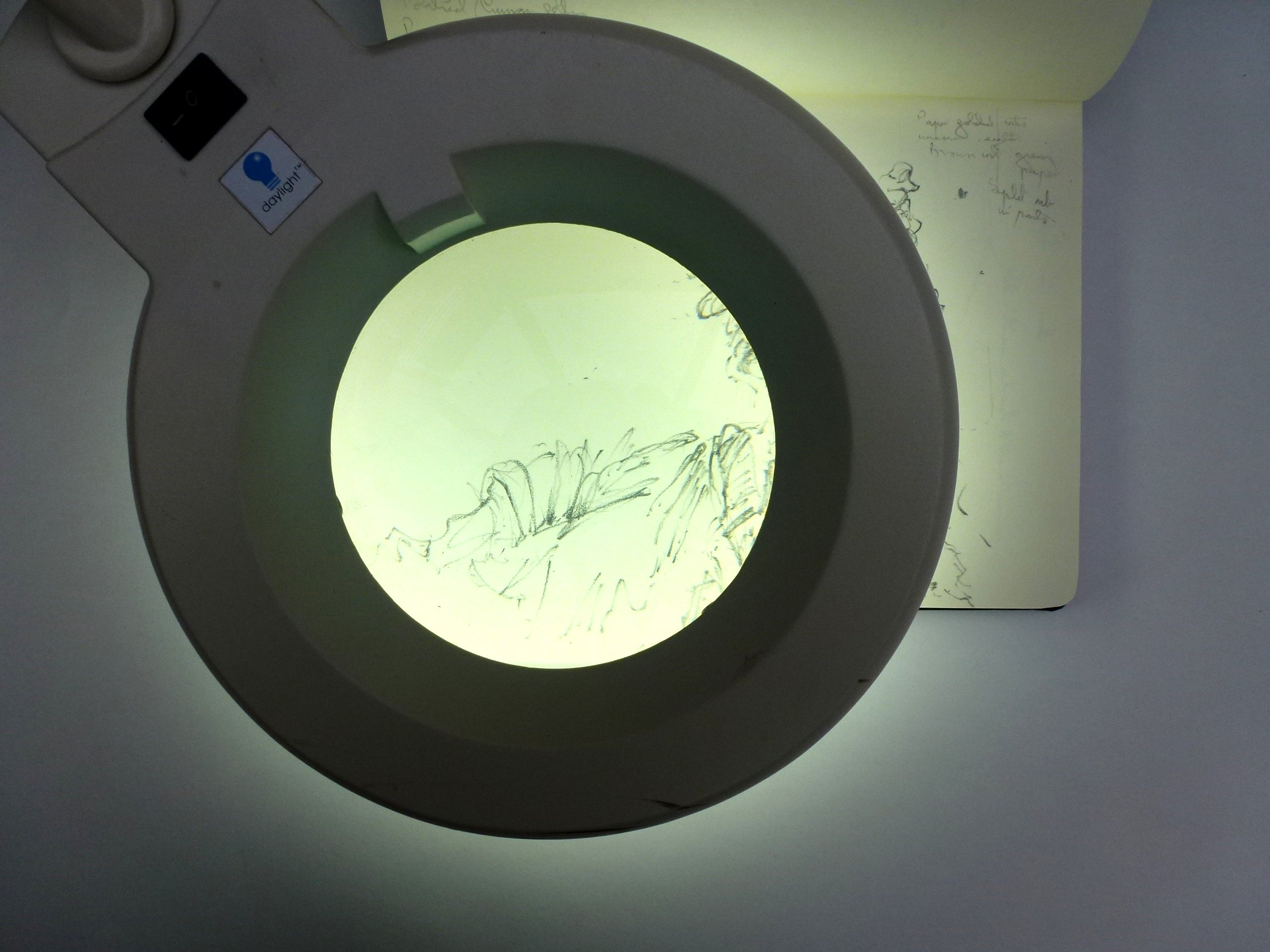 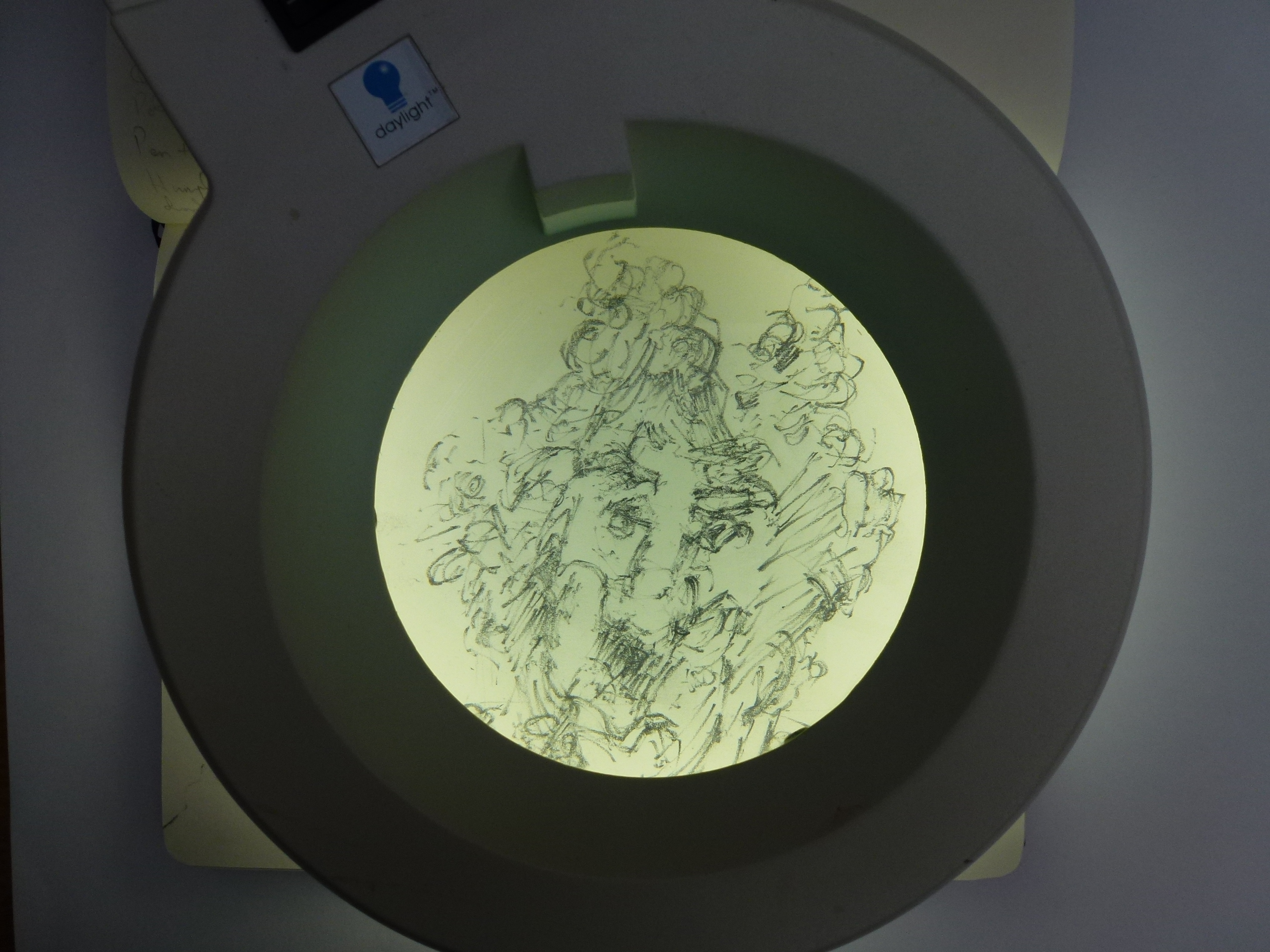 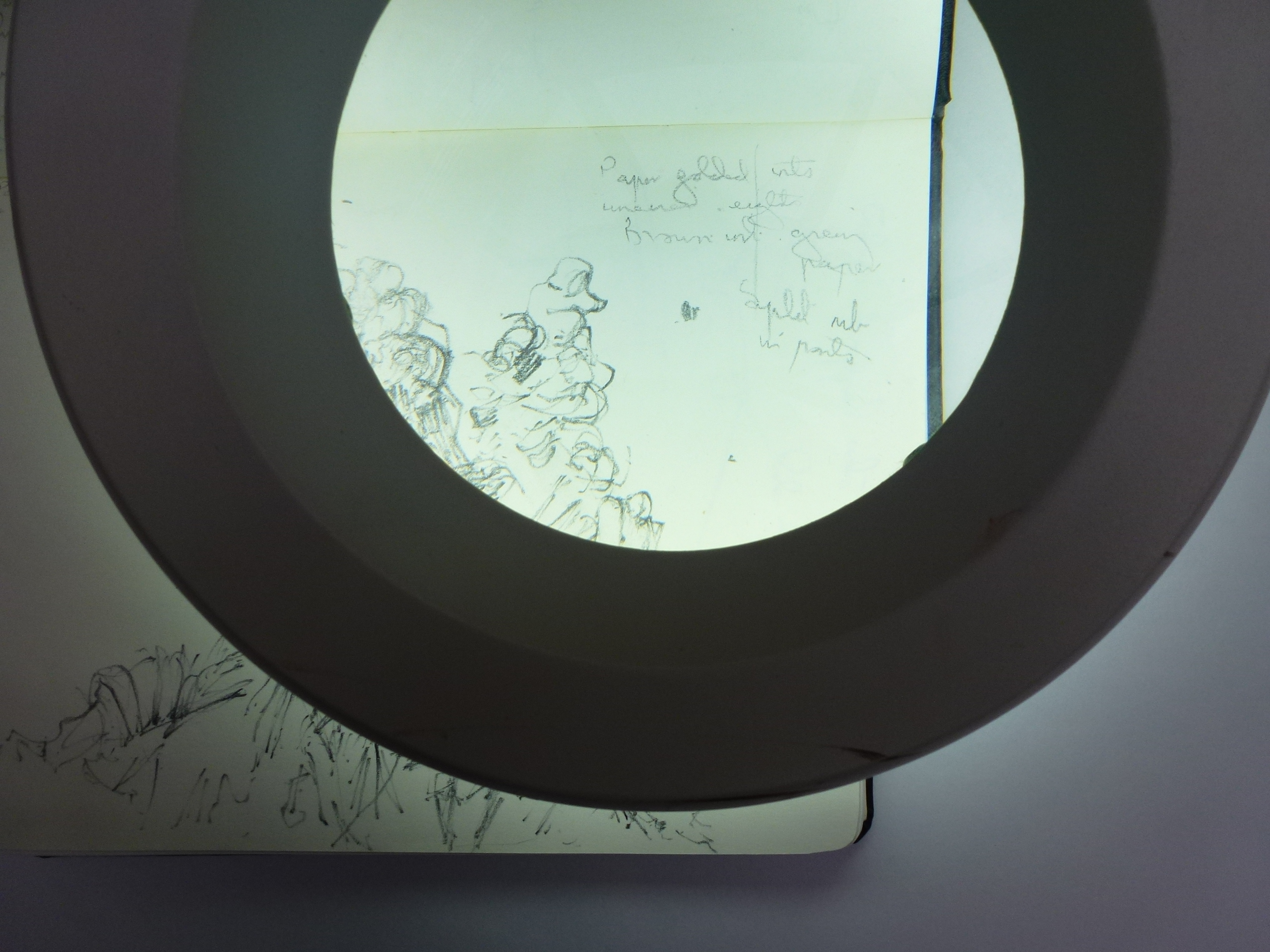 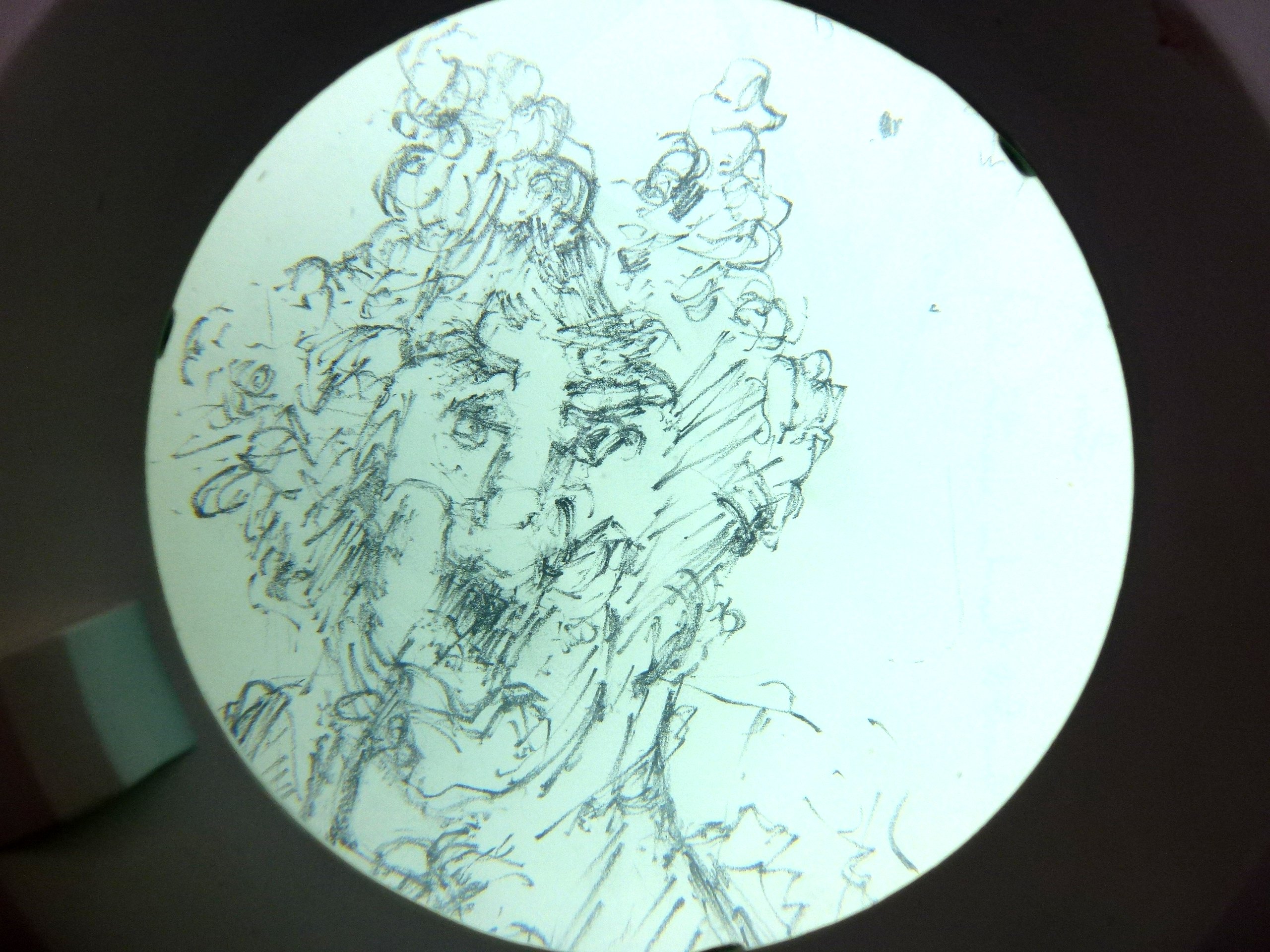 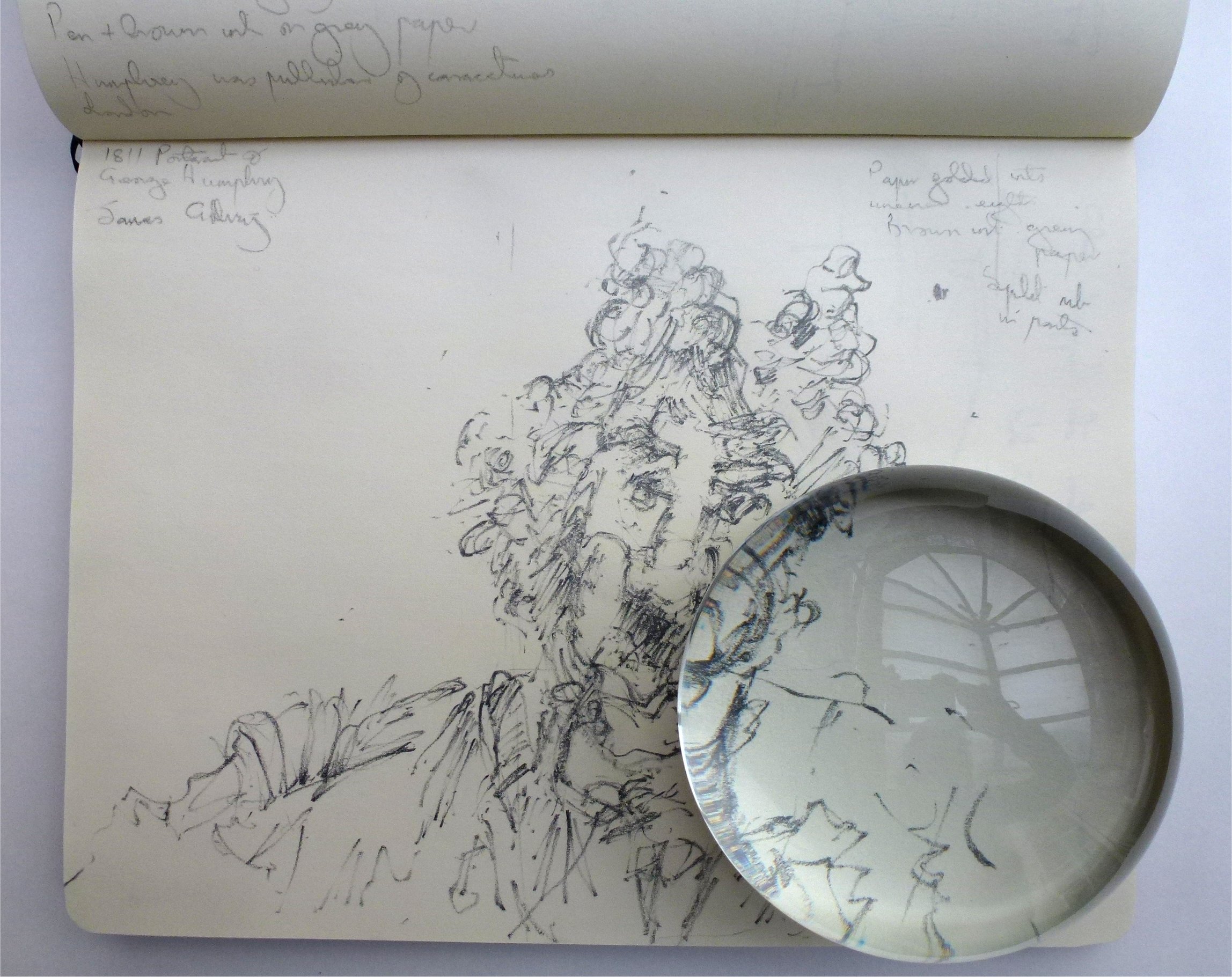 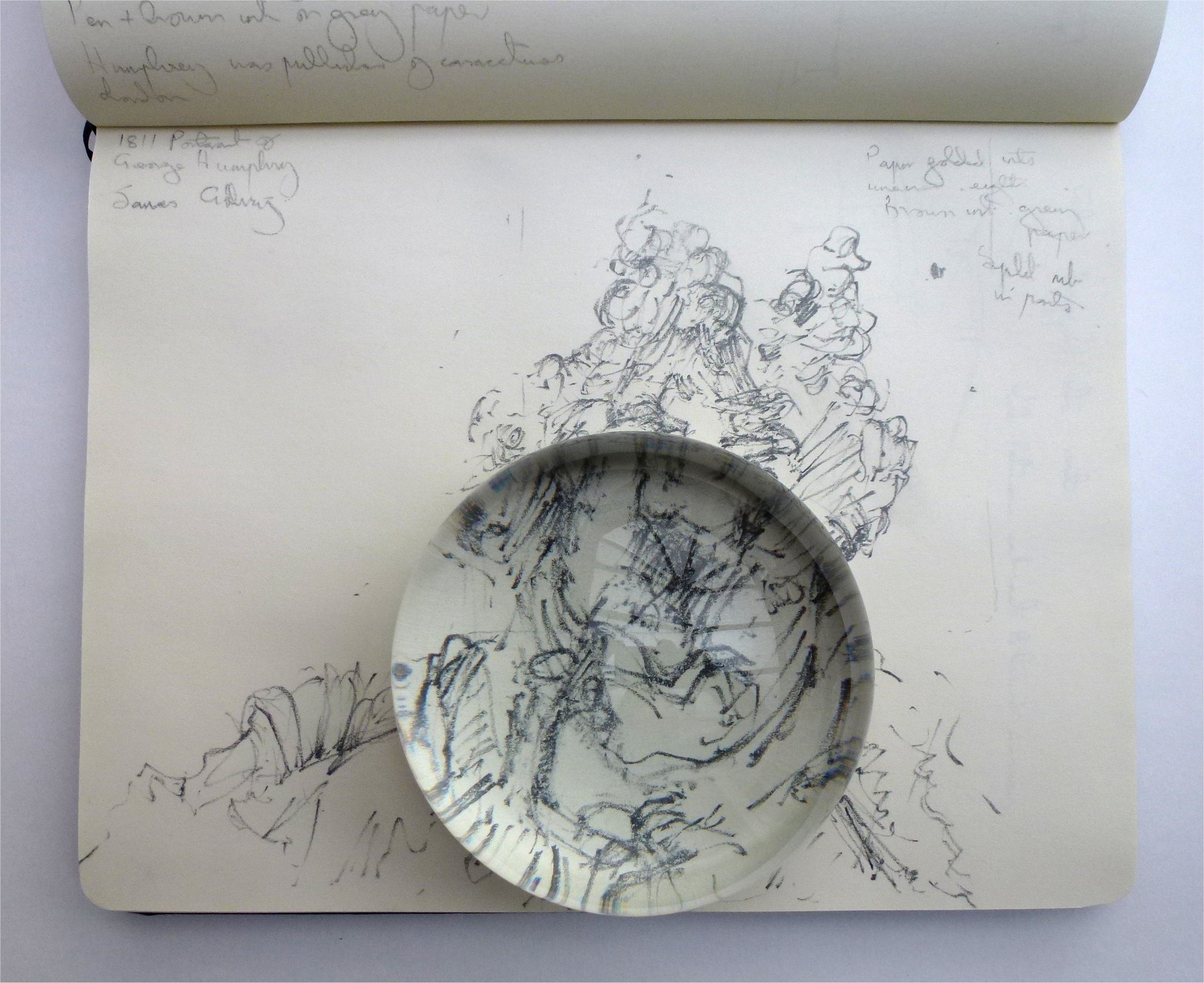 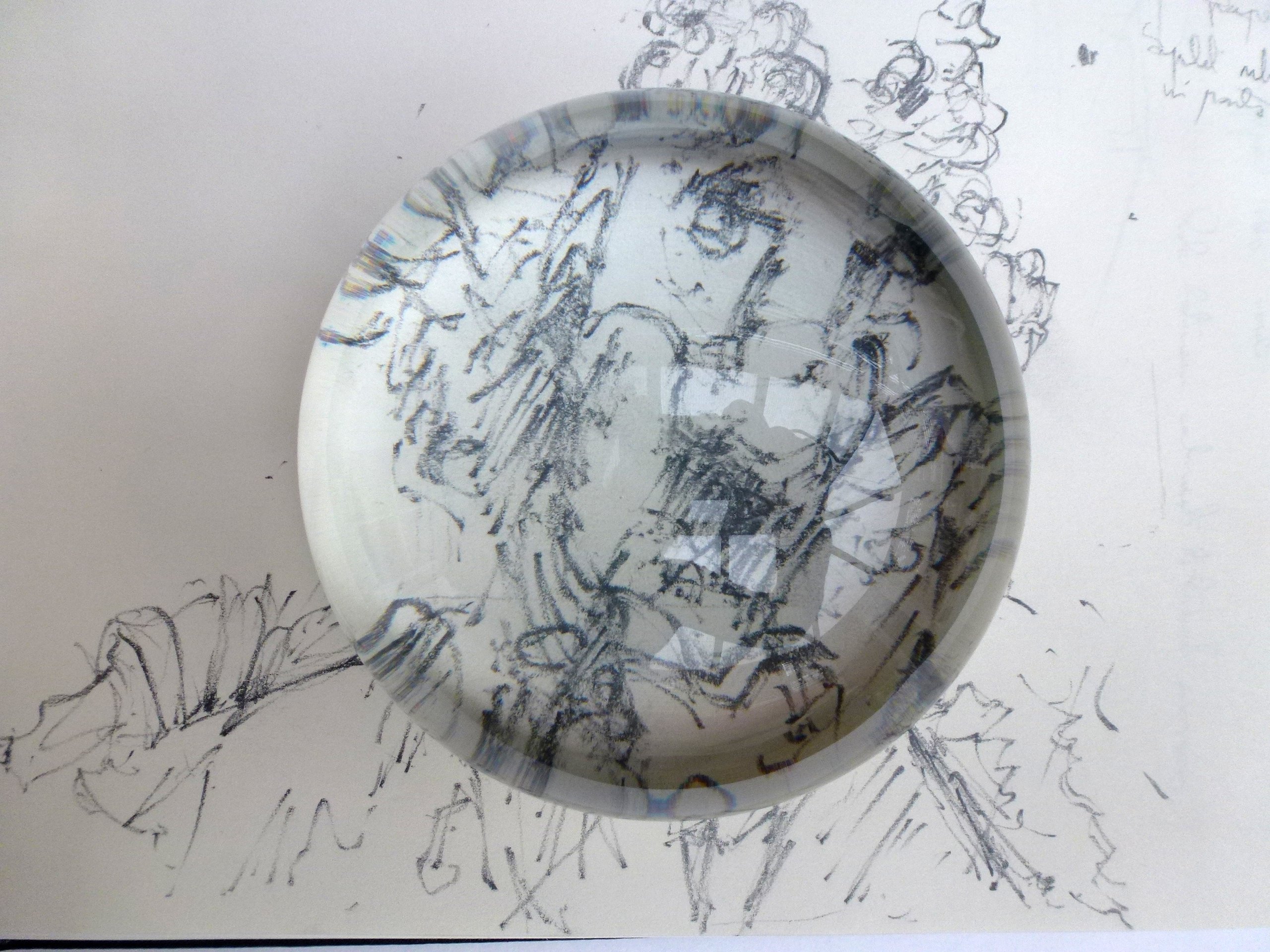 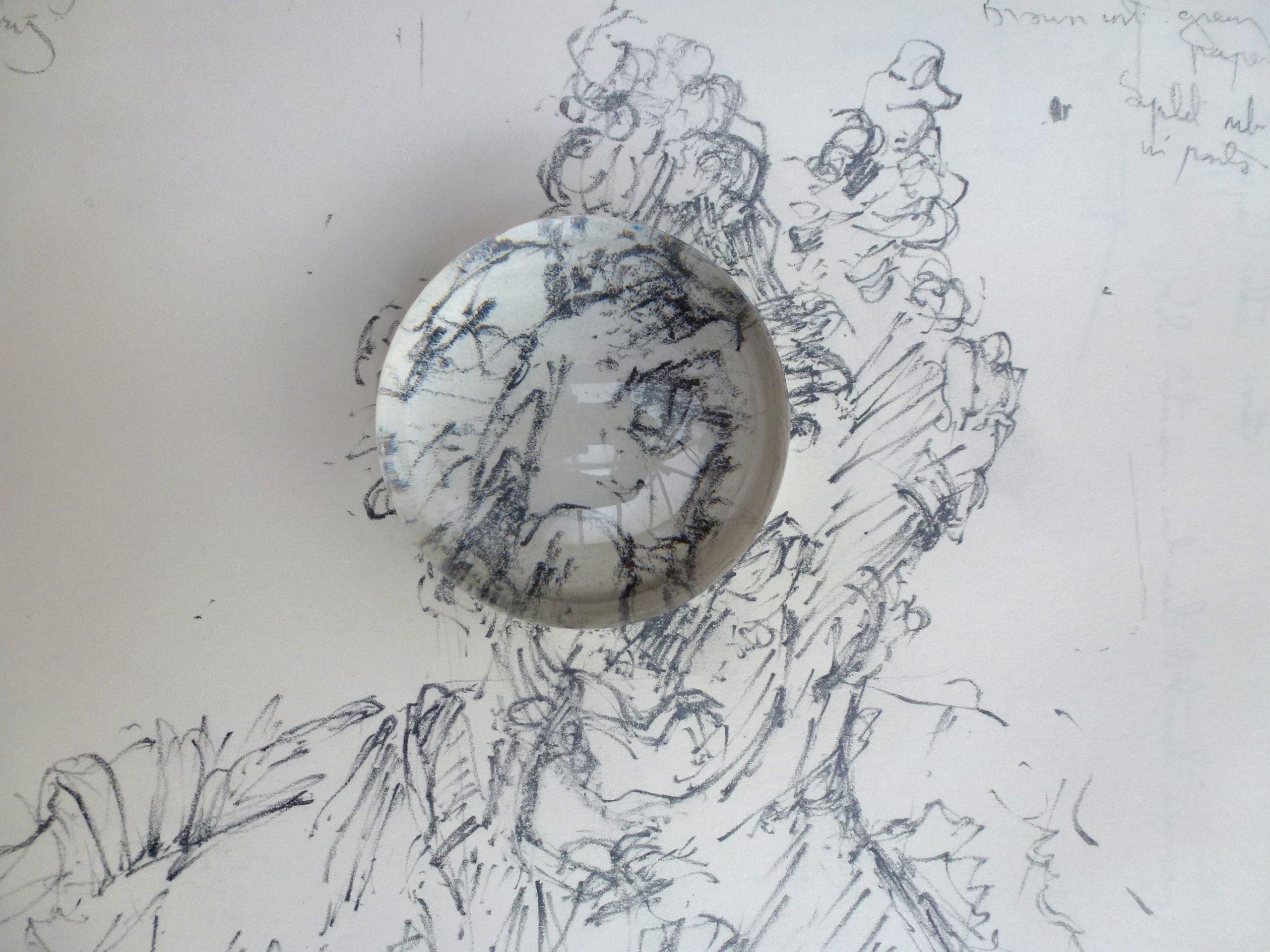 This process of drawing through magnification will be used to create layers of detail on a larger scale drawing.

Pinning my ongoing visual and written outcomes for the transcriptions project in my project space within the student studios offers the opportunity to discuss my approach and progress. 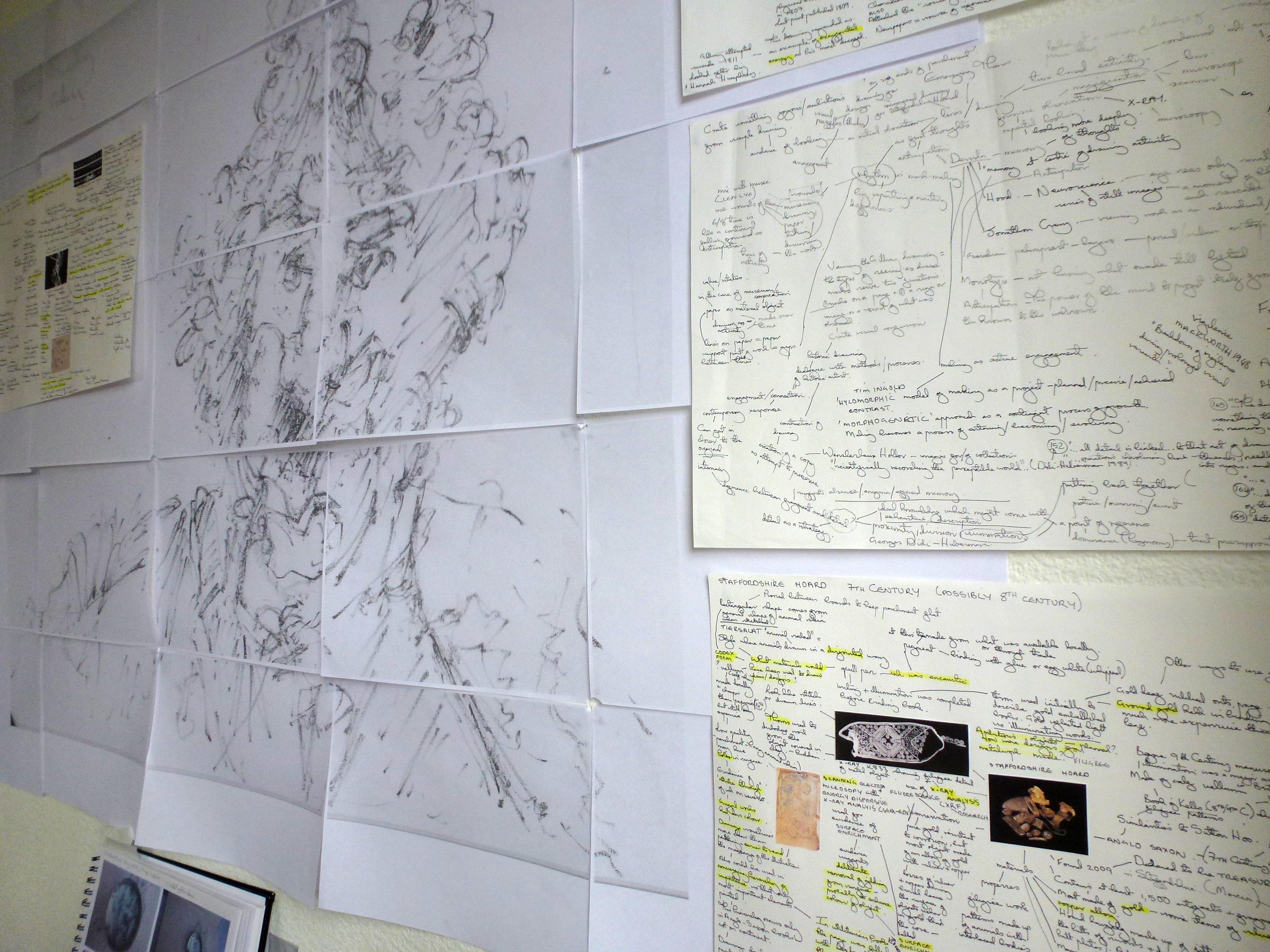 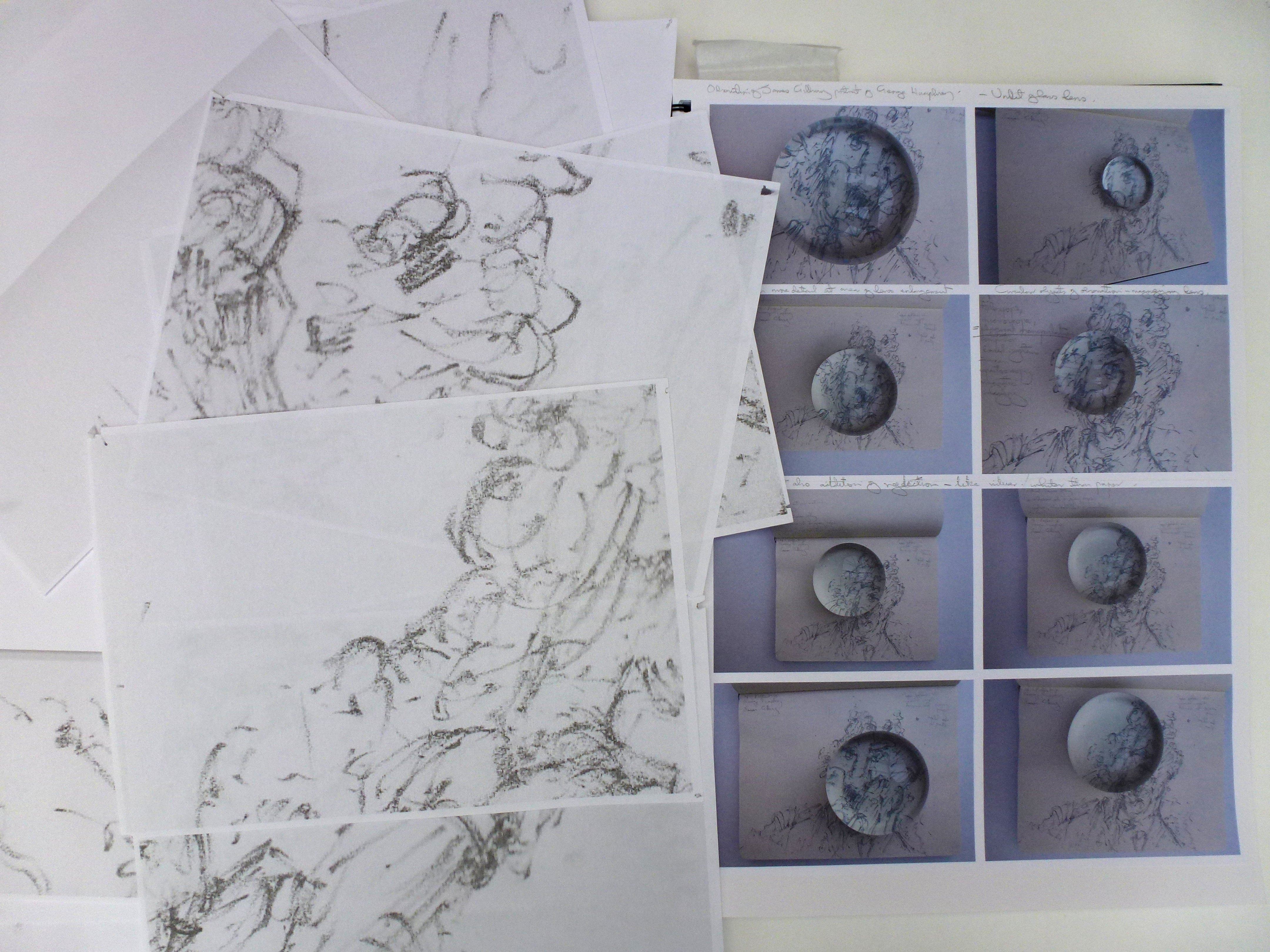 Research into historic inks associated with deterioration of the paper support is important to this project along with investigation of conservation papers, magnification, drawing materials and techniques that reference damage and deterioration of the original Gillray drawing. 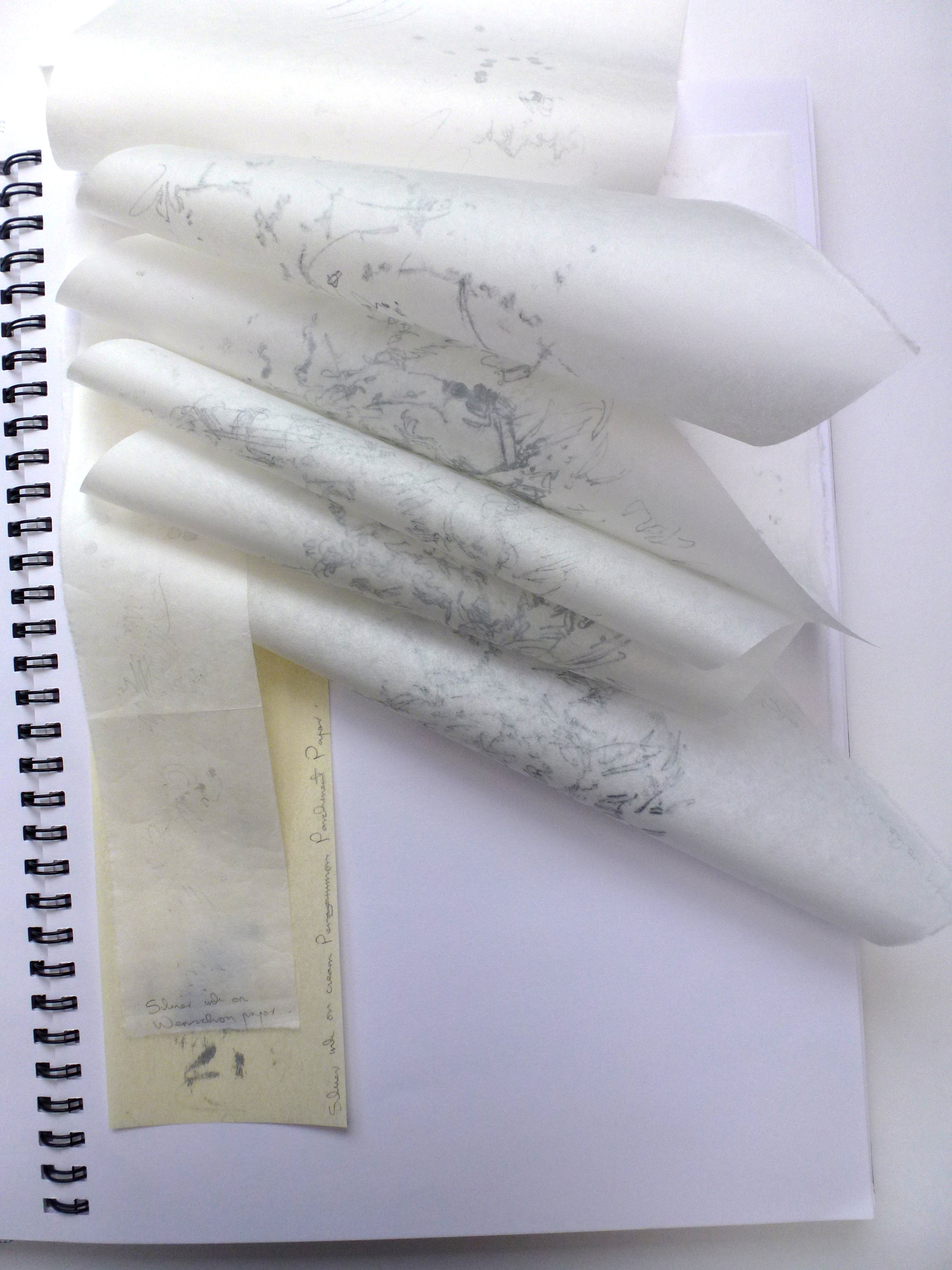 Testing a range of inks and paper supports

My aim has been to recover, through drawing, the activity of in-situ observation of Portrait of George Humphrey by James Gillray using layers of graphite and silver ink on Kozo paper to trace layers of detail within my in-situ drawing. Each episode of observation will be recorded using different materials beginning with an initial layer of silver ink, followed by a layer of graphite using a 9B pencil. As the drawing by Gillray is part of the British Museum collection I have used Kozo, a long fibre mulberry paper, to make my final pieces. The use of silver ink references the fugitive nature of vision and its parallel association with deterioration of the paper support.

I intend to include a bespoke glass lens approximately 10 cm diameter. The glass lens refers to contemporary cognitive neuroscience research which suggests the area of focus in the human eye is no bigger than a thumbnail (Hood, 2011). My aim is to move from an optical or narrative view, found in my original sketch of the Gillray drawing, to explore notions of the tactile, haptic nature of drawing activity by investigating details across the drawn surface. 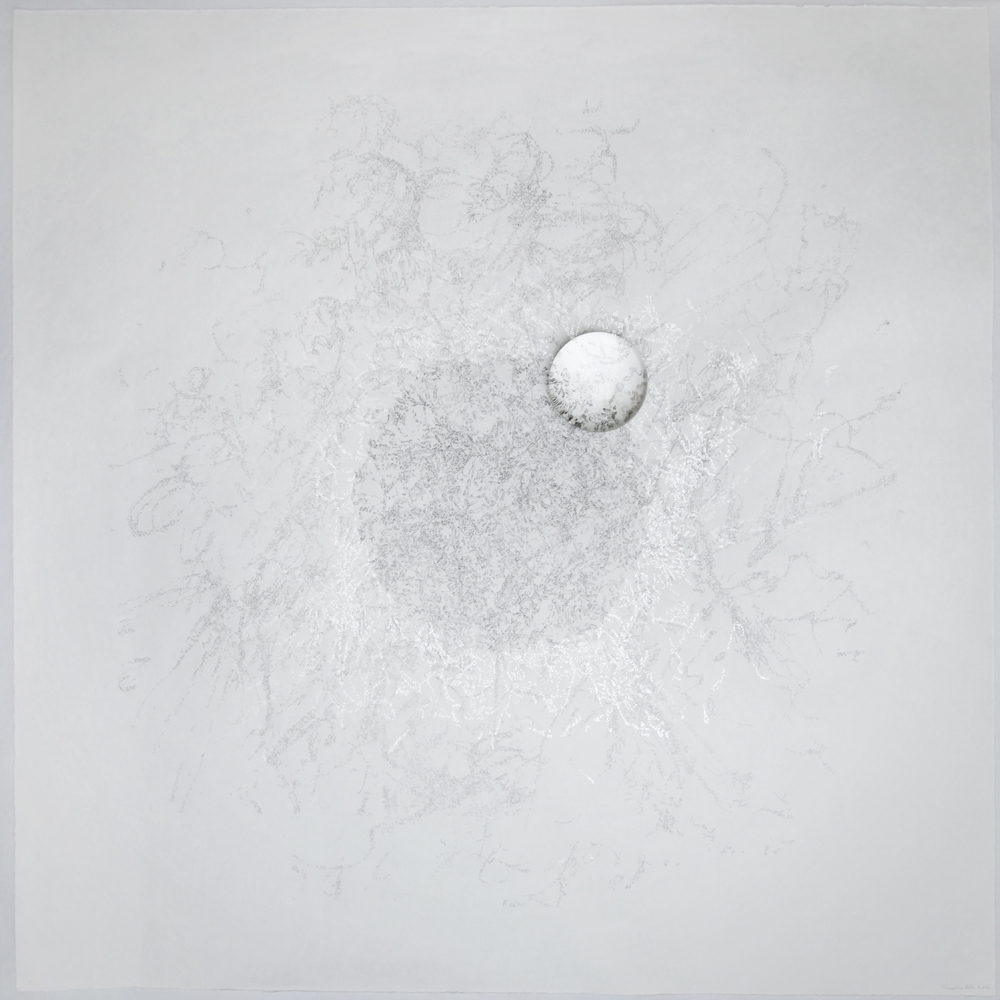 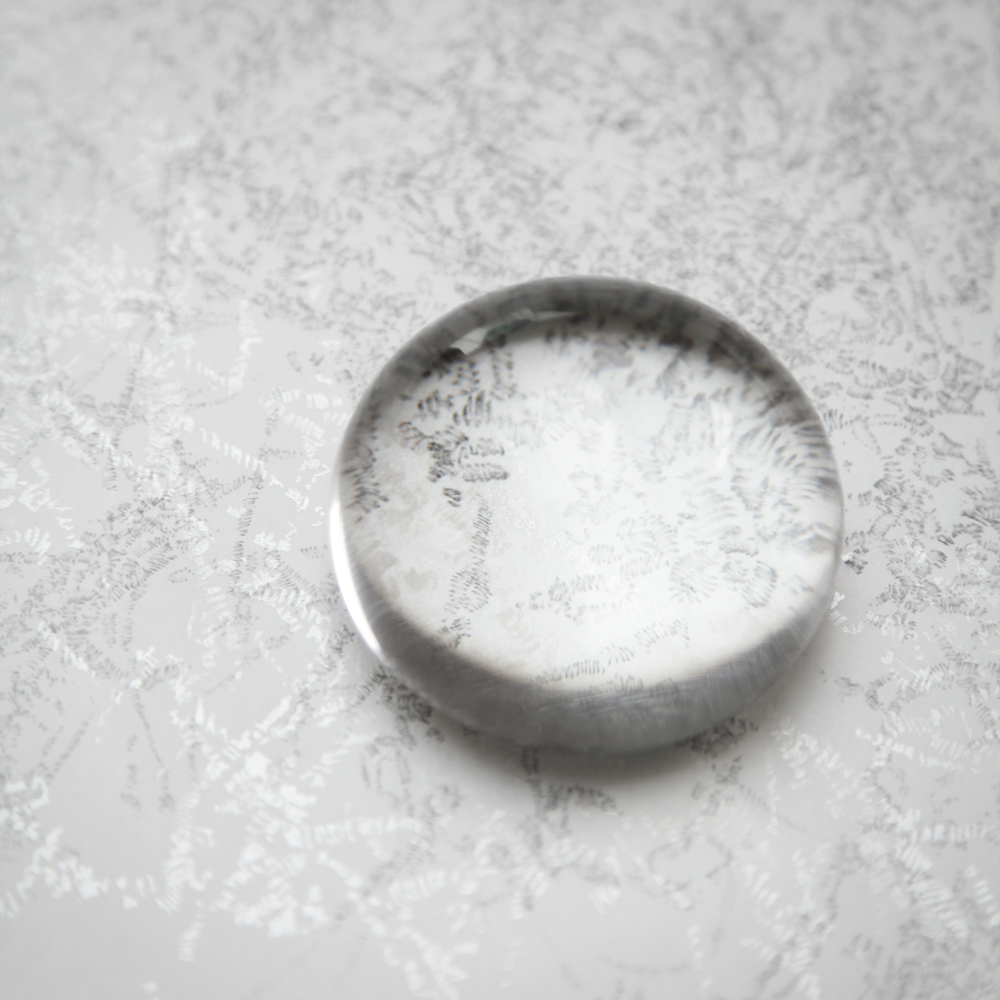 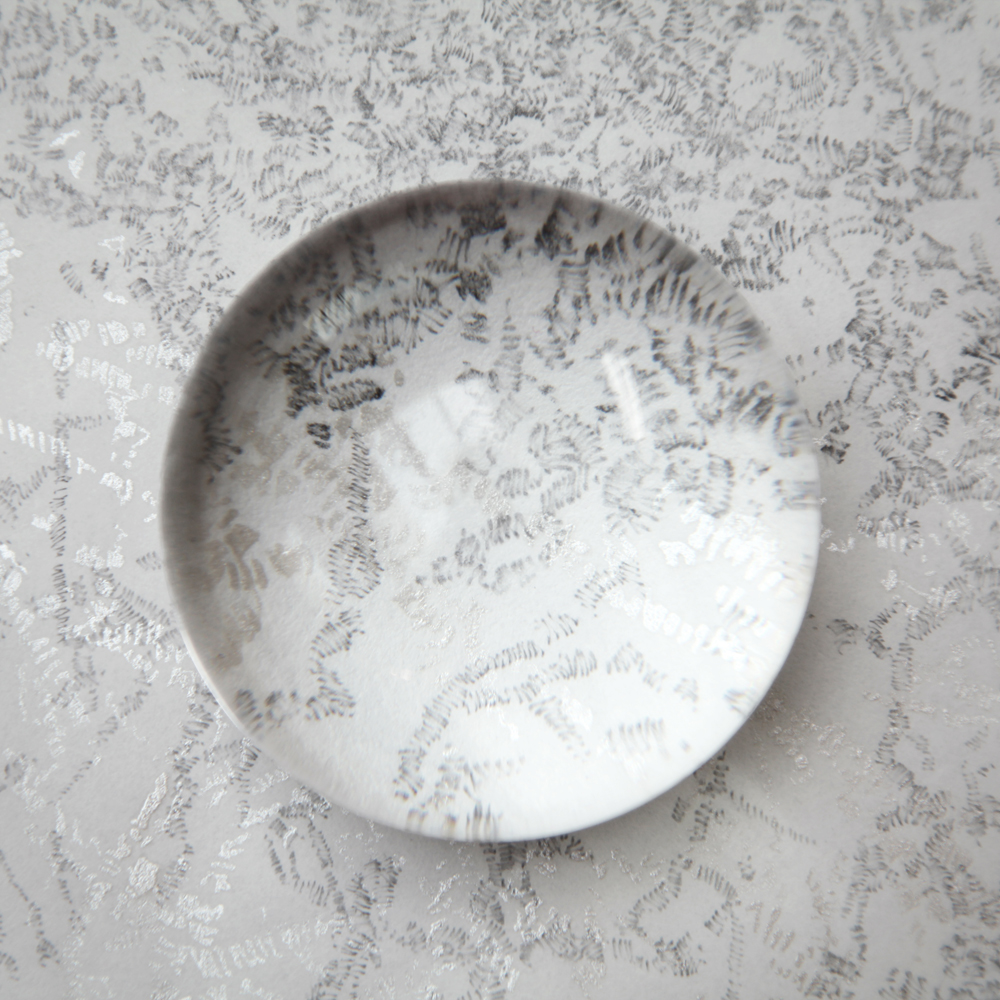 Encounter with James Gillray portrait sketch of George Humphrey 1 (detail) A second glass lens will be made for a further drawing. 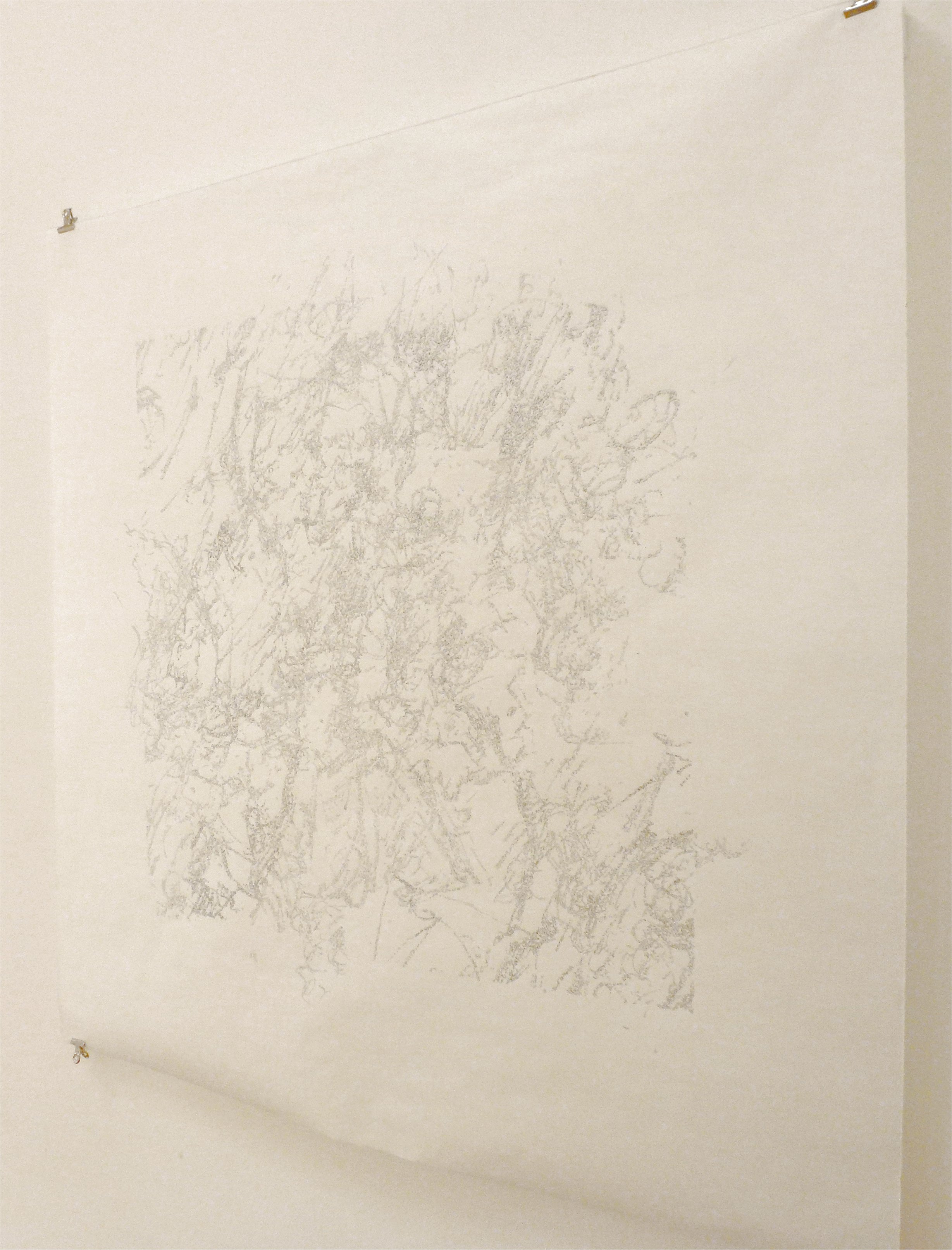 I have explored the Gillray drawing further by way of a second piece that uses similar materials and processes. The image below shows the second drawing in progress. 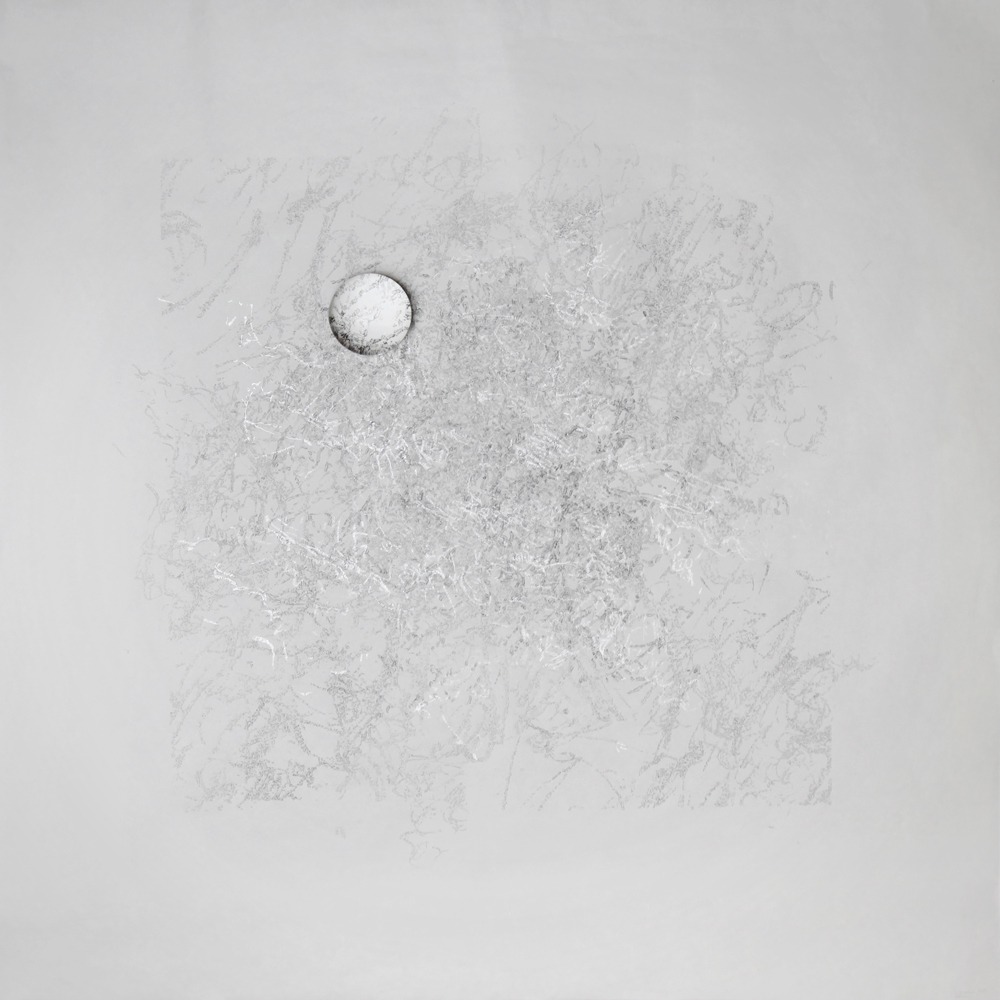 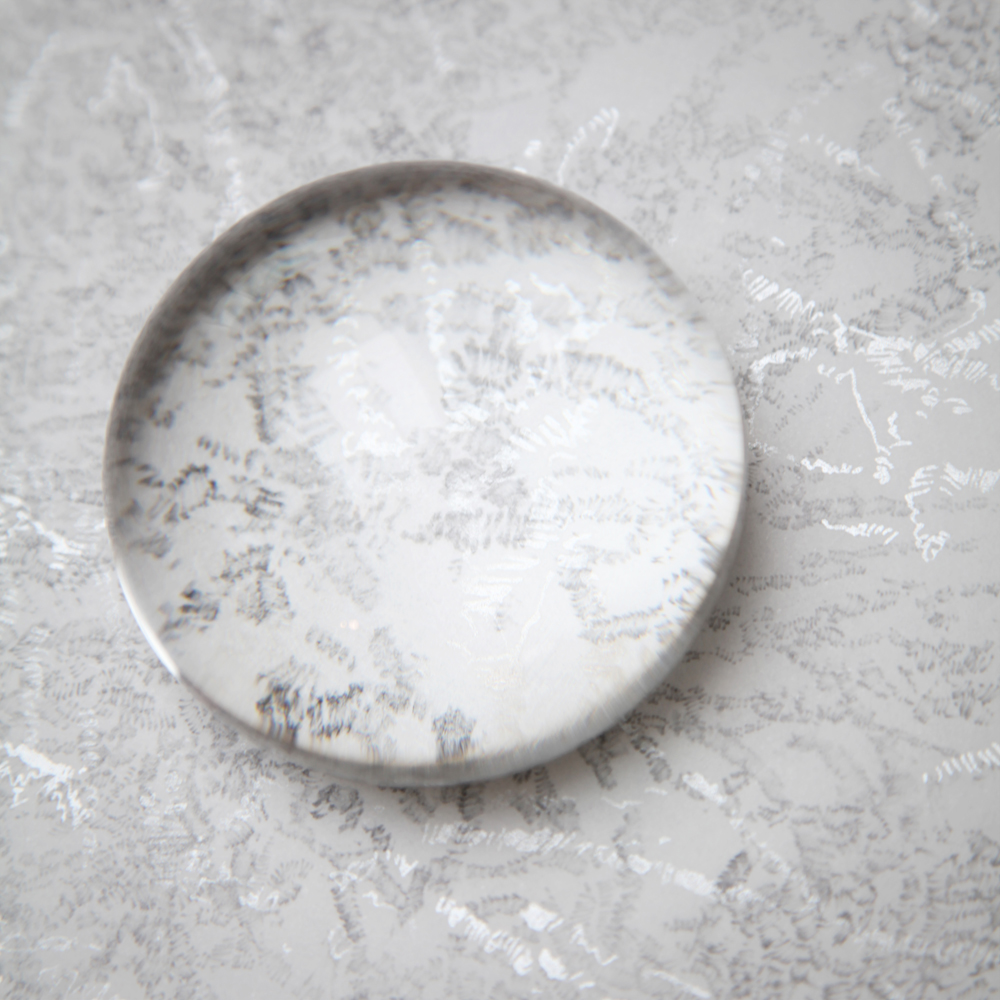 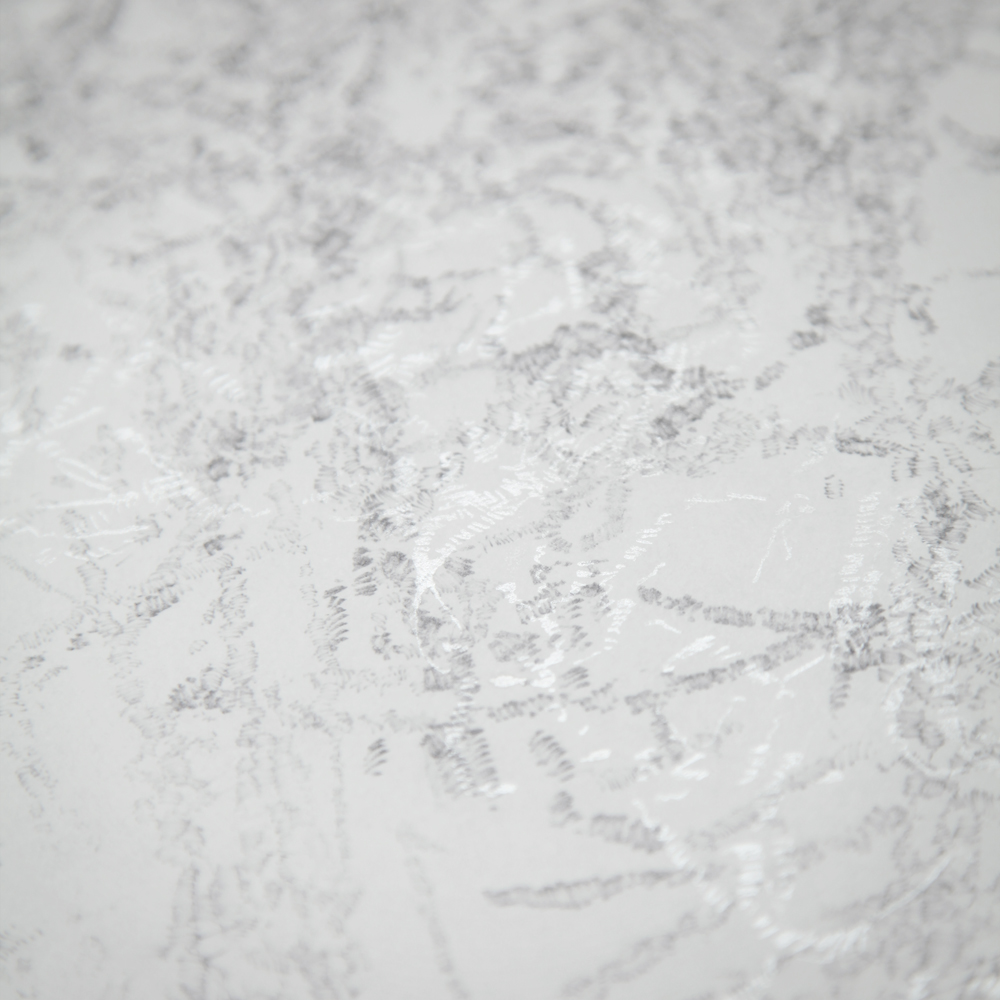 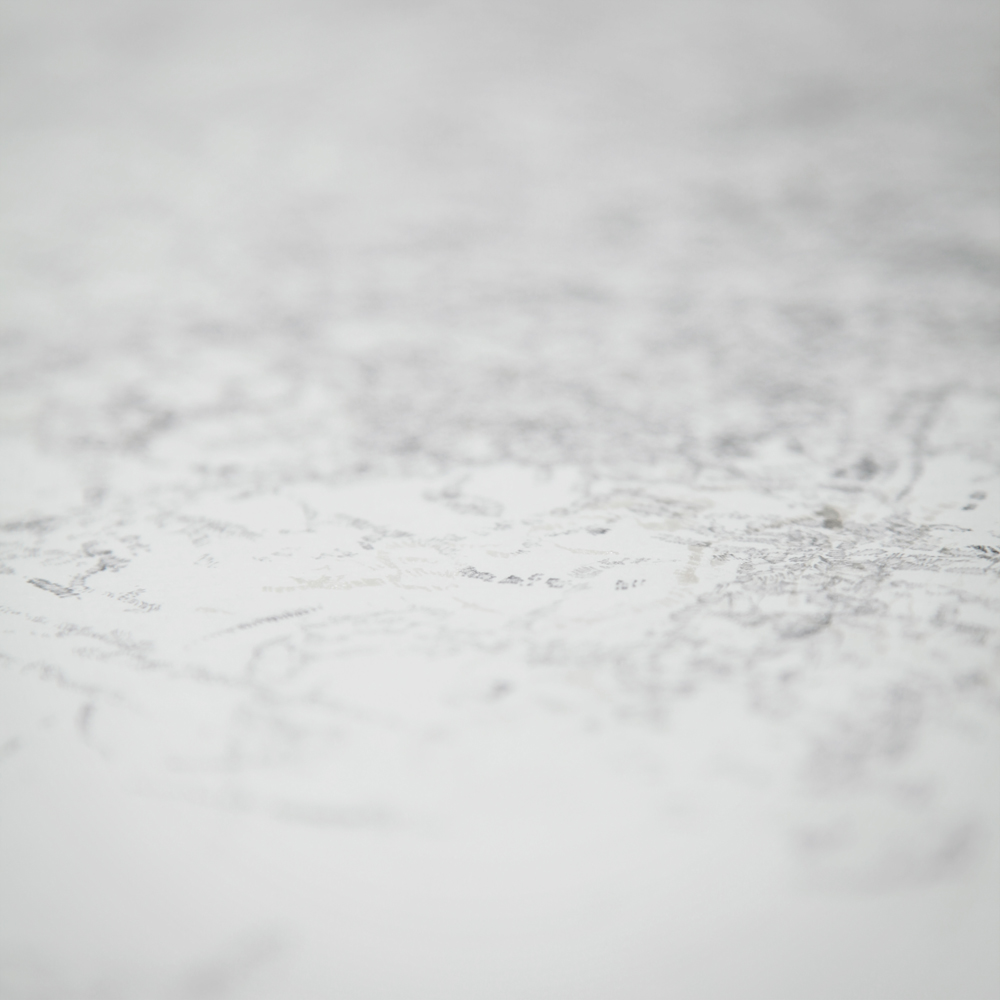 Shown separately, my two final drawings are to be presented horizontally with a glass lens placed off centre on the paper. The drawings will be presented without traditional mount or frame, referring to issues of conservation and the experience of transcribing from the original Gillray portrait at The British Museum. Presented together one of these works could be vertically mounted.

Beyond the Transcriptions Project

Co-curating a public exhibition created an opportunity to show my project outcomes. The nature of the show allowed for James Gillray Portrait of George Humphrey 1 to be presented horizontally with a glass lens on a gallery plinth. James Gillray Portrait of George Humphrey 2 was hung proud of the wall using tiny bulldog clips tacked to a hidden batton. 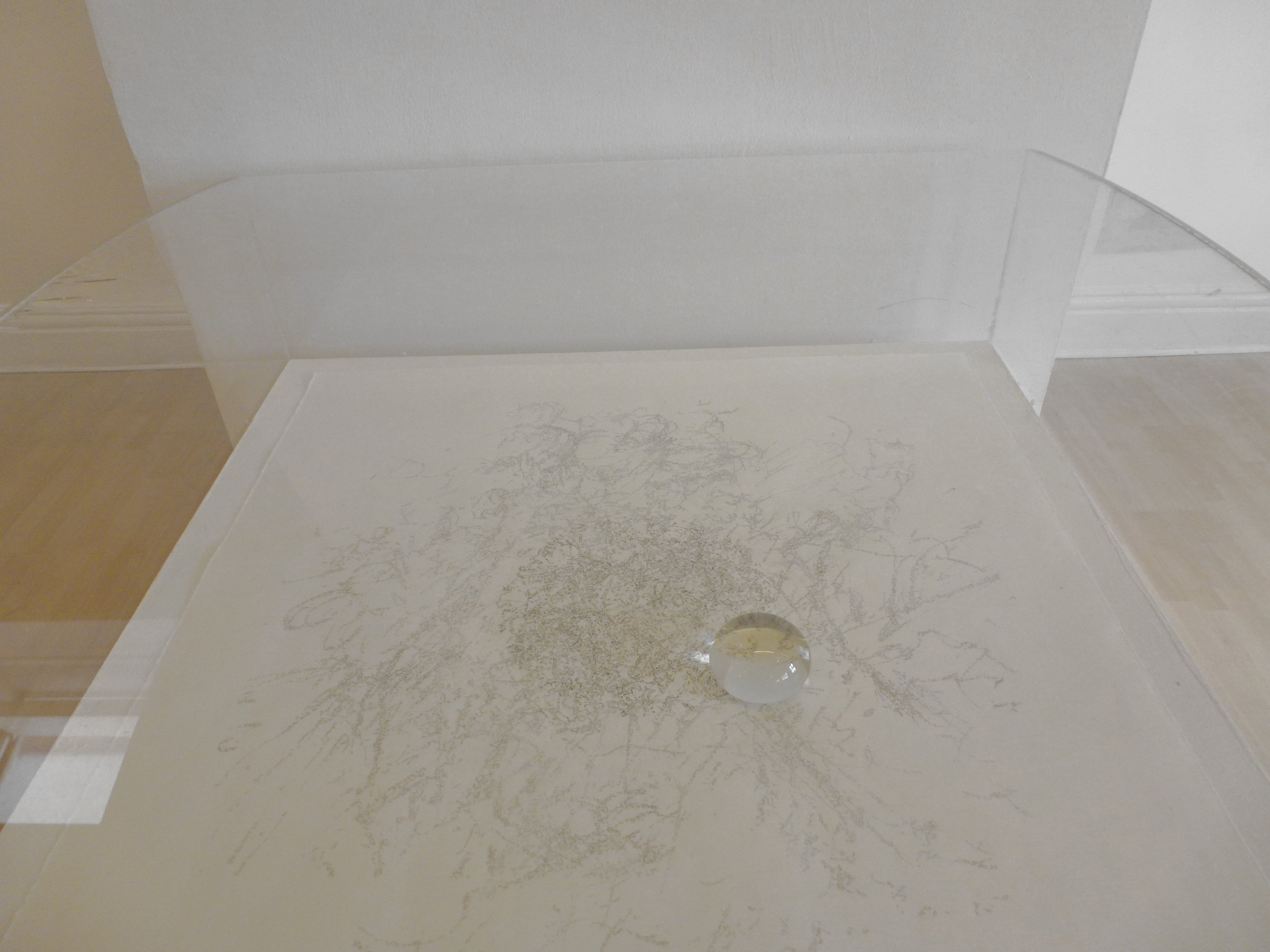 Animation development beyond the project

Alongside the two drawings completed during the Transcriptions project, I also began the process of referencing the experience of in-situ drawing at the British Museum through a short hand drawn animation. Below are example frames from this developing animation. 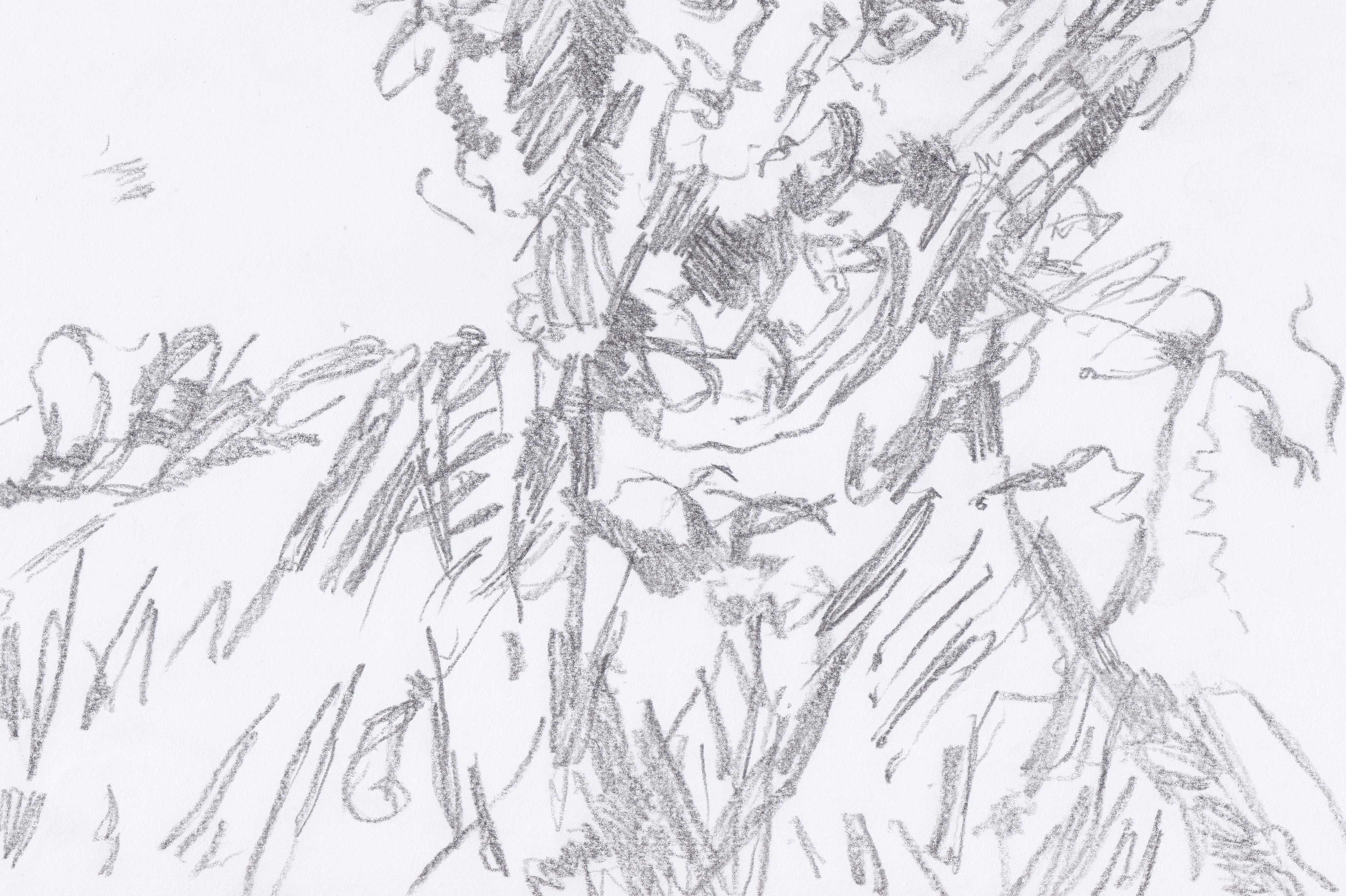 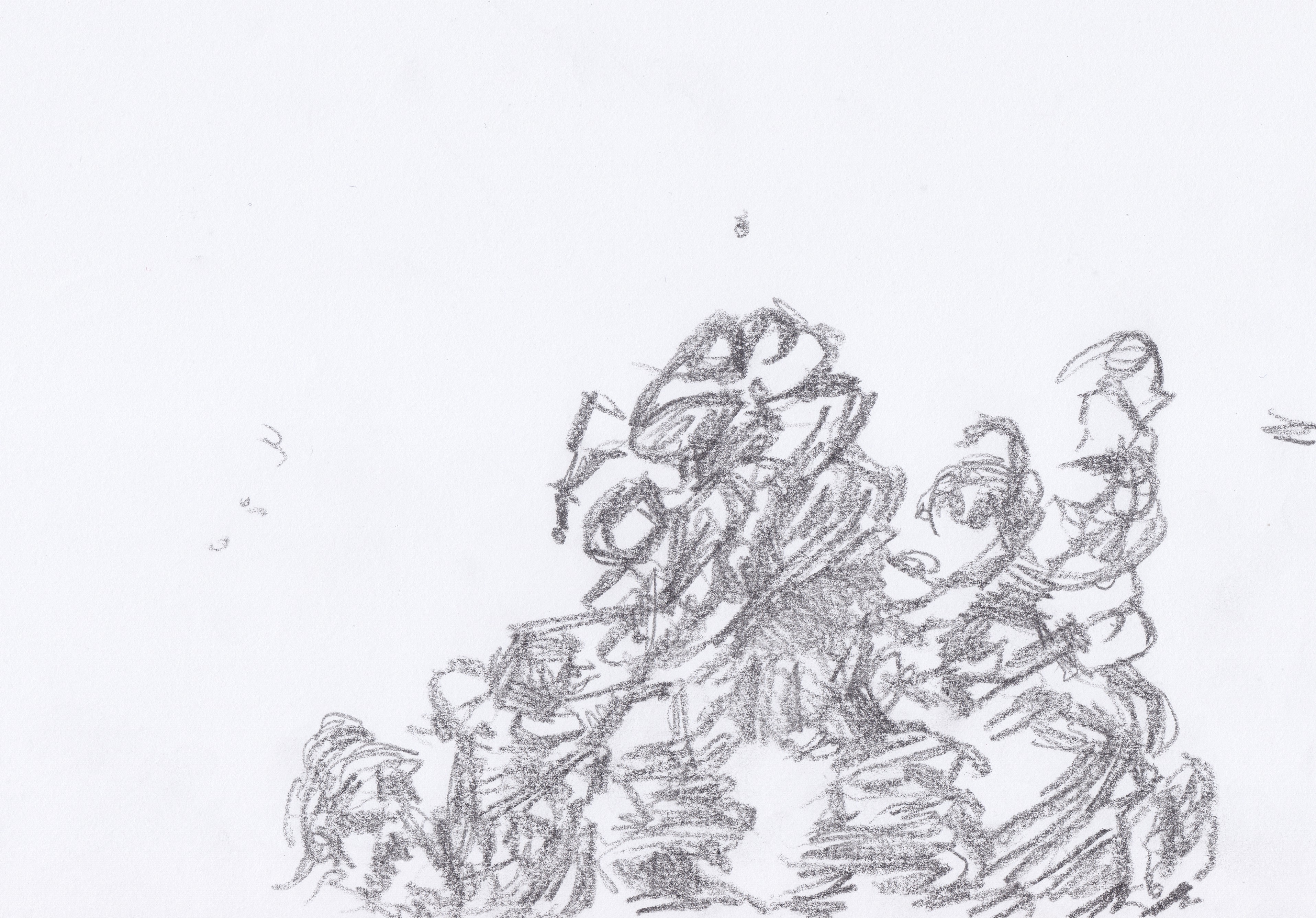 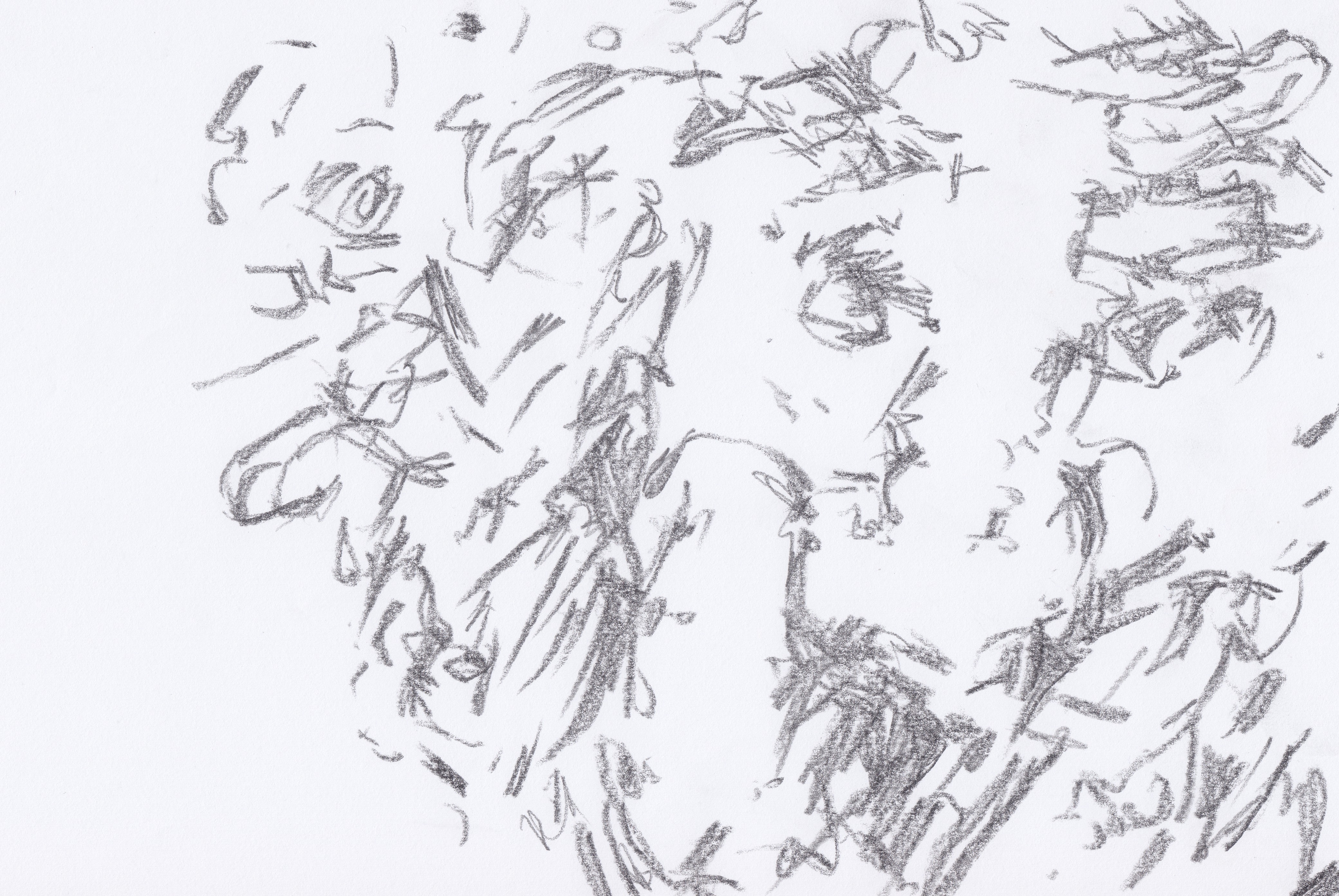 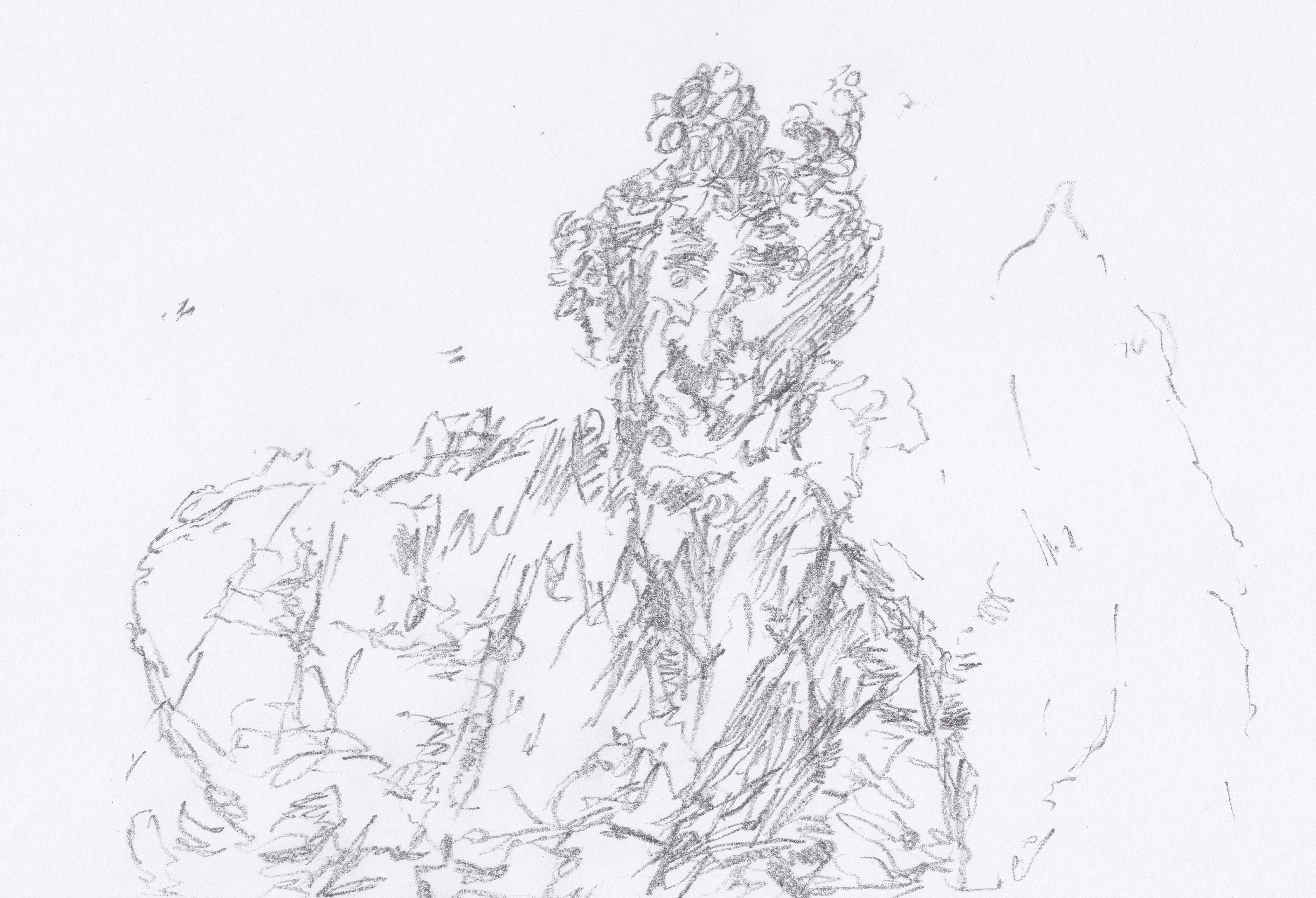 Each frame has been swiftly drawn using a heavy graphite stick on white A4 copy paper. Approximately two thousand frames were drawn during the project. These frames have been individually photographed and the film developed using animation software. Sound recording of my drawing activity, and of the museum, will be part of the Gillray animation which is currently in production and anticipated to run for approximately two minutes.

Turner, S. (2001) A review of James Gillray: The Art of Caricature. Tate Britain.